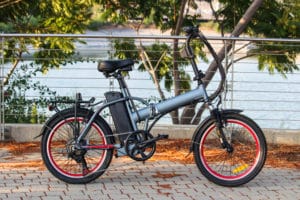 As a society we now focus much more on having positive effects on the environment than we have done in the past. Though, our work commutes haven’t really shifted, which is ultimately a shame. A simple way for us to all go green and help the planet is by making tiny changes to how we get to and from work each day.

Currently 36% of the UK population are car commuters, while only 3% of us make the effort to cycle to work. But, there are other solutions to getting to work on time while doing your bit for the future of the environment. We have so many options with commuting now, whether your journey is short or long, here’s how you can do your bit to change.

Going green is good for business

If you run a business that supports green commuting then it’s going to look good to clients, customers, and members of the public alike. It creates a positive image around your company and can potentially gain you some very good publicity. Think of it as doing something positive and healthy, while also allowing your business to stand out because of this.

We all know that creating a good public image for your business is something that can help to achieve growth and so celebrating the fact that you and your employees choose healthier options when traveling to and from work is a great idea. Going green isn’t all about being vegan or sticking to a certain type of diet, it’s largely about lessening the use of cars wherever possible and developing new, healthy, environmentally-friendly ways of travelling.

Green Commute Initiative is a Social Enterprise with a vision to get commuters out of cars and onto any kind of bike, with the dual purpose of improving both the individual’s health and wellbeing, as well as reducing the environmental impact of pollution and congestion from cars.

This fantastic organisation was developed to make people more active when commuting to work in order to aid the environment. The company have set up a scheme that allows its clients to hire bikes and E-bikes while to use for their route to work each day.

Here’s what the organisation has to say on their use of E-bikes (a name they came up with themselves), “E-bikes are great for commuting as you can cycle in your business clobber and not get all hot and bothered.  What’s more, you’ll turn up to work on time, feeling energised and not stressed from the commute. As a cycle to work salary sacrifice scheme, you could save up to 47% on the price of a bike. And as the industry’s leading scheme, we don’t charge exit fees. How refreshing!”

The main alternatives to driving to work

There are many useful alternatives to driving to work, but these are the main three, in terms of both convenience and friendliness to the environment:

The advantages of this are plentiful, which you’ll be able to vouch for mere days after beginning to do it. Not only will walking help you to stay active while working your nine to five, you’ll also make sure you’re getting some fresh air every day and allowing yourself time for exercise.

Walking will also save you money on your daily commute, helping you to miss out on petrol costs and saving you funds that you’d otherwise use on trains or busses. Obviously this will only be applicable to you if you’re someone with a shorter commute.

Much like walking, if you cycle to work instead of choosing to drive, you’ll allow yourself the chance of becoming much healthier and more physically fit. It can be so hard to maintain a healthy active lifestyle alongside a full time job, so this is a great way of boosting that for any individual.

Cycling also helps people to get into a healthy routine. You know you’ll be doing it every day and at what time, therefore you’ll make it a regular part of your lifestyle. After a week or so it won’t feel like so much of a slog, you’ll be getting used TO it rapidly, and maybe even start hopefully enjoying it. If you’re feeling healthier you may also get a greater amount of job satisfaction from your workplace.

This is often the option for workers with longer commutes, but it is still a better alternative to taking your own car whenever possible. The fumes let out by a bus, for example, aren’t as ultimately damaging as that of individual cars. This is because many people share the same bus, so it’s saving all of their individual car fumes from spreading out into the air and cutting out all of that potential pollution.

If there are many people travelling together in one mode of transport it isn’t so bad for the environment, as it’s understandable that if you have a long commute, you obviously can’t walk or cycle to work; you’ll still be doing your bit as much as you can.

Yes, you can in fact make your commute to work green, well, more green that it likely currently is. By driving slower, which we all could do at times, you can reduce your fuel efficiency by as much as 33% while driving on the motorway and up to 5% while driving around town. Nobody’s in that much of a rush to get to work anyway, are they?

While driving also be sure that your tyres are properly inflated. If your tyres remain correctly inflated, they’ll be more environmentally efficient, lengthen the life of your car, and provide you with a safer way to drive to and from work each day.

Flex Jobs states that it believes a four day working week would help the environment massively, and even bring with it more employee satisfaction. They say, “Rather than telecommuting on the fifth day of the week, change up your schedule so you’re working 40 hours in four days, rather than five. This is typically called a compressed workweek. You’ll commute during less congested drive times AND you’ll have a long weekend, every weekend”.

The four day working week is likely something more and more businesses will begin to employ at their respective offices. The larger the amount of companies that begin to embrace this new idea, the quicker it’ll become widely accepted.

When you’re at the workplace

Tree Hugger has partaken in some research which looks into how we can be more green while actually being in the workplace. This is great advice for those that are having some issues with actually changing up their commute.

They claim that the paper we purchase for our offices can have a big effect on how green a company presents itself to be. “When buying printer paper, look for recycled paper with a high percentage of post-consumer content and as little chlorine bleaching as possible (even recycled paper gobbles up a great deal of energy, water and chemical resources). When using the real stuff, print on both sides of the page and use misprints as notepaper. If your office ships packages, reuse boxes and use shredded waste paper as packing material”.

Reusing older materials whenever possible is also a great option when trying to achieve environmental friendliness, this is why you should look to take down some notes on a piece of scrap paper you’ve already used rather than just throwing it away wastefully.

Tree Hugger says, “If you just have to use paper, opt for recycled paper and envelopes that have been processed and colored using eco-friendly methods. Pens and pencils can also be made of recycled materials, and refillable pens and markers are preferable to disposable ones. Use biodegradable soaps and recycled paper or cloth towels in the bathroom and kitchen, and provide biodegradable cleaners for the custodial staff. Buy in bulk to reduce shipping and packaging waste, and reuse the shipping boxes. It’s often free to recycle printer cartridges, and recycled replacements are cheaper than new ones”.

The government have just announced their brand new ‘fix your bike’ voucher scheme, which will offer people with a damaged push bike, a £50 voucher which can used to pay for repairs. This comes at a time when Prime Minister Boris Johnson is making an effort to crack down on on the obesity problem we have in the UK.

Encouraging more people to cycle is a great way to help those who need to lose weight to do so, but it’s also a fantastic way to improve your general fitness, help the planet and make your working day more fun and varied.

The scheme itself is available to anyone in England who has an unused bicycle that’s in need of a repair. Though, you should note that there are only a limited amount of vouchers available, so if you’re wanting to take advantage of the scheme, you should look to proceed quickly, before it’s too late.

The vouchers can only be used with bike repairers or mechanics that are registered to the scheme itself, though if they aren’t already there’s still time for them to do so now. Up to two vouchers can be claimed per household, so if you’re part of a keen cycling family whose cycles need some attention, get your repairs now and start utilising the vehicle that will allow you be environmentally helpful and keep you active.

By following this link you can claim your vouchers today, though you should be aware that they’re being released in phases, so if there isn’t any available when you first check, try again at a later date. The Energy Saving Trust website is the place to visit if you want to get hold of a voucher.

The government have done a great job of sending out the message that we need to be more active as a nation and try to help our planet in the process of doing so. Brush the dust of your bike, get it fixed up and get back out on the road again. The vast majority of us could do with the extra exercise after being locked indoors for so long, so taking advantage of this thoughtful scheme is a great way to get started.

Furthering the encouragement of cycling in the UK will undoubtedly help put a stop to the excessive amount of small journeys will make in private cars. Also, the fact that social distancing measures are still in place means that if we can give people a strong alternative to public transport, that’ll only make matters better and easier to deal with for all involved

Promote at your workplace

Set the example at your own place of work by heading up the initiative and asking others to join you. You could install bike rails in your work’s car park or just pass the word onto others about what you’re doing, which will hopefully encourage them to give it a try as well.